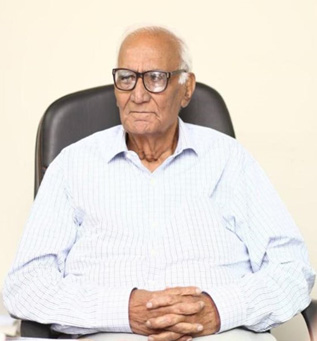 Legendary academic, outstanding Statistician, exceptional professional leader, generous philanthropist and a highly respected household name in the statistics community, Professor Dr. Munir Ahmad was born on February 22, 1932 in a respectable Muslim family of Sialkot, Pakistan. He completed his school education in his home town. He used to tell that during one of the visits of the Spiritual Father of Pakistan, Dr. Allama Muhammad Iqbal to his home, Dr. Munir Ahmad sat on his lap. He completed his Bachelor degree from Murray College Sialkot, M.A. in Statistics from Institute of Statistics, University of the Punjab, Pakistan in 1954, and Post-Graduate Diploma in Statistics (M.Sc. Statistics) from Aberdeen University, United Kingdom in 1959. He obtained Ph.D. degree in Statistics from Iowa State University, USA in 1968.

He started his academic career at the University of the Punjab as a Research Scholar and Lecturer in 1955. After completing his Ph.D. degree, he served as the Chairman of Department of Statistics, Karachi University for 1971-1973. Then he worked at Tripoli University, Libya during 1973-1977 and later at King Fahd University of Petroleum and Minerals, Saudi Arabia from 1977-1994. He also served as the Dean, Faculty of Mathematical Sciences, The University of Lahore during 2000-2002, and lastly become Rector, National College of Business Administration & Economics (NCBA&E) from 2002 to 2019.
Dr. Munir Ahmad was an exceptional academic with extraordinary track record of teaching, research, management & leading multi-disciplinary team in the area of priority setting, strategic planning, project budgeting, financial monitoring, generating research funds, visualizing new & innovative research programs, course extending from inception of an idea through preparing presenting, developing plans, implanting the programs are the few to name amongst host of capabilities he possessed.

He was the Founding Editor-in-Chief of Pakistan Journal of Statistics, its first issue was published in 1985. He was also the Chief Editor of Journal of ISOSS. While serving at King Fahd University of Petroleum and Minerals, Saudi Arabia, Dr. Munir Ahmad laid foundation of Islamic Countries Society of Statistical Sciences (ISOSS) at Lahore (Pakistan) in 1988 during the organization of First Islamic Countries Conference on Statistical Sciences (ICCS-I) with the objective of providing a platform to the statisticians of Islamic countries for professional engagements and development of statistics in the OIC member states. He served as the President of ISOSS until Professor Dr Shahjahan Khan (Australia) was elected as its second President in 2005. Under his leadership, the ISOSS held a series of 14 Islamic Countries Conferences in different Islamic Countries like Malaysia, Morocco, Indonesia, Egypt, Qatar, Pakistan etc. Likewise, 17 international conferences on Statistical Sciences held under his able leadership in different parts of Pakistan.

When Professor Dr. Shahjahan Khan proposed to introduce ISOSS Gold Medal to recognise outstanding fundamental contribution to statistical research and promotion of statistics in 1999, Dr. Munir accepted the idea instantly. Since then several prominent statisticians have been honoured with ISOSS Gold Medal.

He received ISESCO, OIC, Morocco and ISOSS Joint Award for Contribution to Statistical Sciences in the Islamic Countries. He was an elected Member of International Statistical Institute, The Netherland; and a Fellow of Royal Statistical Society, UK; and Life Member of ISOSS and Pakistan Statistical Association. He served as Contributing Editor to Current Index to Statistics for a number of decades.

He supervised 32 PhD and more than 25 MPhil students in Statistics and allied areas. He contributed to 39 books and published more than 280 papers in international journals of repute. He also edited large number of conference proceedings.

When the American publisher of Journal of Applied Probability and Statistics (JAPS), decided to discontinue its publication, on the request of its Chief Editor Professor Dr. Shahjahan Khan, Dr. Munir Ahmad agreed to publish JAPS from ISOSS Publications in 2011.

Professor Munir Ahmad has produced and trained a large group of highly recognised statisticians, researchers and academics in Pakistan and all over the world. I had the opportunity to serve as an external examiner of thesis of some of his PhD and MPhil students who have accomplished high quality research under his supervision. One of his dreams was to make Pakistan statistically sufficient country by satisfying all requirements. He also led the vision of introducing common statistics undergraduate curricula in the tertiary institutions of Islamic Countries.

The construction of ISOSS House in Lahore is an accomplishment by itself. Dr. Munir Ahmad was the key to procure the land and then initiated fundraising to establish the office building. His dream become true when opening ceremony of the ISOSS House was held in 2010.

During his last days he was concerned about the development of Pakistan. He was seriously working on sustainable development goals. Through the nation-wide network he created under ISOSS, he has been driving hard to procure relevant data to determine the indicators on each of the goals.

At the beginning of his tenure as the Rector of NCBA&E in 2002, he introduced and started M.Phil./Ph.D. programs in Statistics, Mathematics, Management, Computer Science, Economics & Environmental Management. Under his able leadership the programs were successfully run & NCBA&E was recognized as 2nd best educational institution in the Province twice by Higher Education Commission of Pakistan.

As a generous philanthropist, Dr. Munir Ahmad was more a humanist than any other. He used to support every individual that approached him for help. He also tried to alleviate the sufferings human beings.

Dr. Munir Ahmad died while serving as the Rector of NCBA&E on June 29, 2019 in Lahore (Pakistan). May his soul rest in peace. He left behind his widow, son Dr. Aftab Ahmad, daughter Dr. Alia Ahmed and thousands of his peers, students & colleagues among mourners with a strong believe in him as a leading academic, researcher, mentor, teacher & well-wisher. His family was always behind him and inspired him to the cause of ISOSS.

Among his legacies are ISOSS, Pakistan Journal of Statistics, ISOSS House, Journal of ISOSS, and a large number of statisticians and users of statistics who were inspired by him. His paramount contribution will be proudly remembered by his peers across the world in the decades to come.

It has been an honour and big privilege for all of us to be a part of his great mission and help achieve some of his dreams.